Last weekend, LSH and I took a trip to the Spreewald, an idyllic forest landscape  best known for its picturesque canals and high-quality gherkins.

We brought our bikes on the train, and cycled to a campsite where we rented a wooden lodge with a lakeside view. There was a small shop nearby that sold gherkin beer. On our  first evening, we cracked open a couple of bottles. 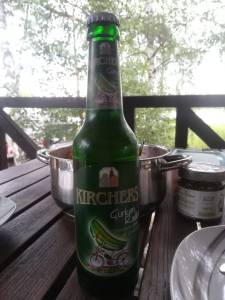 It’s not that bad.

LSH practically spat his out in disgust, but he was just being melodramatic. If you’re wondering, imagine a bog-standard lager with a cucumber floating in it, and you have the flavor.

We toasted to a restful and restorative weekend that would leave us ready to embrace the challenges of everyday life with a fresh sense of purpose.

Less than twenty-four hours later, we were back in the lodge, splayed on the couch with a pain known only to those who spend 364 days of the year sedentary and then cycle for ten hours straight.

We turned on the television – yes, we were glamping – with the innocent intention of unwinding briefly while we rested our weary limbs.

There was no way we could have known that we would spend the next several hours transfixed by the shopping channel and that I would return to Berlin not rested and restored but fixated on the idea of buying “WC Zauber Pulver,” an extraordinarily potent powder which turns into a magnificent blue foam when you pour it down the toilet. 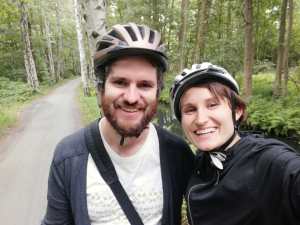 It was mesmerizing. I’d never seen anything like it! Just fifteen minutes, the woman said for a deep clean of your most poo-encrusted lavatory.

Well, she didn’t actually say the last bit, but it was heavily implied.

“Drop it all in in one swift motion,” she said, tipping the plastic cup into the toilet with all the confidence of a person who sells WC Zauber Pulver” for a living.

The transformation happened before our eyes.

“Why not deep clean the toilet brush while you’re at it?” she asked, popping it in.

As the foam filled the entire toilet bowl, an animation showed the deep cleaning taking place beneath the rim, too subtle for the naked eye to perceive.

“Just one bucket will last you a whole year,” the evangelist said. “And why stop at toilets? You can use WC Zauber Pulver to clean any kind of drainpipe!”

She popped some powder into a lonely free-standing sink in the middle of the studio.

“There’s nothing that cleans like it,” she said. “And available only today, for just €19.99, what are you waiting for? Pick up the phone. Oh no, stop! What’s my producer telling me? They’re going fast! We’re nearly sold out! If you want to get your hands on this product, you have got to act fast.”

The number on the screen was dropping faster than I could dial.

My heart was racing. In the background, the foam in the toilet had reached the rim.

“We need to get some WC Zauber Pulver.”

The woman returned to the toilet, and flushed. As if it had all been a dream, the foam disappeared, leaving the inside of the bowl as sparkling and pristine as freshly fallen snow.

“I am deadly serious.”

“I can’t believe you’re falling for this.”

I still want to order an industrial-sized bucket of WC Zauber Pulver. 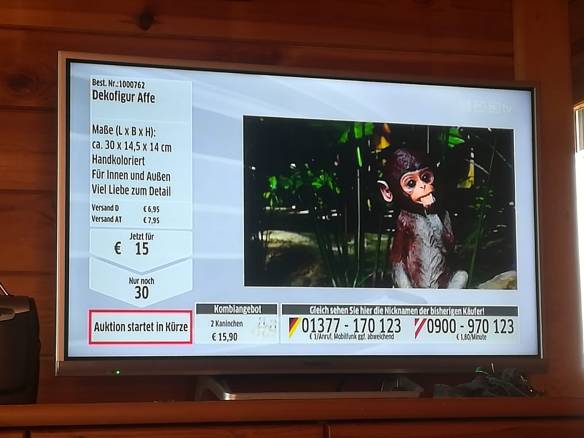 I was much too enthralled by the WC Zauber Pulver demonstration to take a picture. But the shopping channel was also selling this worried-looking decorative monkey, which I thought to snap.

I was slumped on a bench in Vienna Stadtpark a couple of days ago, hungover, watching ducks in a pond. A black coot swam over to a drake and unprovoked, nipped it in the buttocks. The drake spun around to face his aggressor, then thought the better of it and glided away.

On the bench to my left, a girl was sitting alone, smiling to herself. She was waif-like and innocent-looking with long brown hair and large eyes. She seemed unusually still.

Suddenly, as if out of nowhere, two girls clutching tiny pads of paper approached her. They began very quietly, to question her. All the time the girl murmured her answers, she kept the little otherworldly smile on her lips. The others were noting down her answers and nodding sympathetically; their faces full of vivid reassurance. I couldn’t make out a word of what they were saying.

The air was cooler than it had been the last few days. 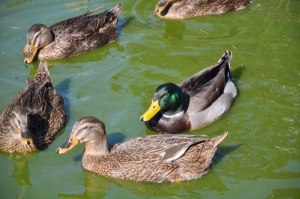 Suddenly a gust of wind snatched some sheets of paper from the girls’ grip. They flew up into the air and landed in the pond. The girls gasped, turned, stretched out their arms, laughed, then gave up and pointed helplessly at the white specks as they dispersed across the water.

I forgot about them for a while because I was distracted by a lady on the other side of me playing with her grandson. He was bouncing on her knee and laughing. I caught the lady’s eye and smiled. She had auburn hair and an elegant face. After a little while, her daughter came back. “Look,” she’s back, the older lady told the baby, turning him so that he faced his mother. He beamed and she sat down beside him and rubbed his nose.

I looked back at the three girls beside me. They had closed their eyes and were speaking to God. All I could hear was the address “Herr.” Soon it was over, and the two girls disappeared. The original one remained on the bench, sitting bolt upright, her expression and posture unchanged. Though it was pasted to her face, her smile had an ephemeral quality. She had been touched.

The grandmother and her daughter laid the baby between them and together changed his nappy. They couldn’t have looked any happier. The pleasure they took from the task was nourishing.

As I was leaving the park, I passed a man wearing a red plastic nose, a pair of plastic glasses and a floppy hat. He was dipping a folded piece of rope into a bucket of soapy water and blowing giant bubbles. A little girl was clapping her hands and chasing them before they disappeared into the gravel on the ground.

I wandered home and some of the guilty hollowness left by the hangover was gone.

LSB and I are bookish types. We met in a library, not on a sports field. While he gallops through the classics, I canter along beside him, skimming paragraphs to keep up. Altogether we’re contented.

But ever since our arrival in Vienna, we’ve been committed to a course of self-improvement. When we’re not saving ladybirds or relaxing in the museum quarter, we’re exchanging skills. I’m teaching him German (his progress is remarkable) and he’s introducing me to chess. I now know my rook from my knight and he can distinguish between the genitive and the accusative case. 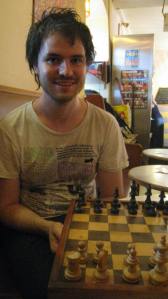 LSB in a coffee shop off Mariahilfestrasse, where he began teaching me chess

It’s all well and good to study a new language and familiarise yourself with chess; for bookish types like us, both activities qualify as recreational. To really test our commitment to self-improvement, we need to tread outside our comfort zone.

Conversation turned to that very theme last week, while we were walking down Mariahilfestrasse.

How could I resist?

We went into a sports shop. I saw some kids trying out the treadmills so I did the same. A shop assistant came over to reprimand the children, accusing them of breaking the machines. Then she came to me wearing a large smile and asked if she could be of help. I said I was just “looking” and ran away as fast as I could.

Eventually we found the section we were looking for. In between snorkels and body boards, we found some large plastic discs.

LSB picked it up and gasped.

“Sure we could use a paper plate for free!”

We passed a stamp shop, a furniture store and a hat shop.

Finally we found a toy store.

We found some frisbees inside a basket of Barbie beach balls.

LSB pulled some out.

Since then, LSB and I have discovered talents we never knew we had.

We may have started out unable to toss the bloody disc in any direction at all, and we have certainly hit a good number of beautiful Viennese park-dwellers, who thought they were out for a relaxing afternoon in the park, but you should see the beautiful arcs in the air that we can now achieve.

While I’m content to continue shooting long backhands, which I have mastered, LSB is keen to make swift improvements. In recent days, he has become intent on mastering the forehand. Unfortunately up to now, all attempts in that direction have landed far off target. I swear he’s doing it to make me run.

A few minutes ago, I looked up at LSB, who is sitting at the window with his laptop, looking over the Danube. A strange sound was coming from his computer. It sounded like a chorus of sea gulls.

“What are you doing?” I asked LSB, who is supposed to be preparing for his future life in Edinburgh.

The sun is beginning to set, casting a beautiful orange glow over the water. There’s just enough light left for a quick game.

Update: We played frisbee in the dark outside the national library.

Also, as regular readers may have noticed, I have a new picture as my header. If you become a fan of Katekatharina on Facebook, you can see the complete album of the photo shoot, which I’ll be posting tonight.