“I thought that at my age I could no longer cry,” said Frau Bienkowski. “But this morning, the tears came.”

Frau B had spent the whole day trying to get hold of a packet of sanitary towels because ever since her hip operation, she has been unable to retain water.

But the person in charge of making the fortnightly order was on holiday and nobody had thought to take over his duties.

In the end, one of the volunteers popped over to the chemist’s to pick some up. They weren’t the right kind, but they would do for now.

“I’d be lost without Frau Lintz,” said Frau P of the lady in question.

The nursing home is short-staffed because there have been an unusually high number of deaths over a short space of time, leaving several rooms empty.

Money is tight and management won’t increase the staff-patient ratio. So when a certain number of residents die without being replaced, the carers lose their jobs too.

Death at the nursing home is a small table placed outside a bedroom door. On it is a candle and a framed photograph of the deceased.

A few months ago there was a table outside the room opposite Frau B’s.

“The lady across the way died,” Frau B said, matter-of-fact.

And another time she said: “Every night when I go to sleep I pray that I won’t wake up.”

But if I have learnt anything from my weekly visits, it is that welcoming death is not the same as abandoning life.

Frau B and I are seventy years apart but we talk like sisters – about boys and clothes and death and what’s in the news.

We laugh out loud at the absurd hen-shaped egg-timer she’s been given instead of an alarm clock and I bring her several packets of the sweets her doctor has told her not to eat.

We continue reading the book about the cantankerous Irish nuns, even though we get through about ten pages each week and I’ve been paying library fines for months.

Recently, we found out that we both get dressed up for my visits.

“Sure who else notices what I’m wearing?” Frau P asked with a smile and I told her I felt the same way.

So if death is a small table, life is the perm Frau B insists on getting touched up every week.

And the moments we spend laughing at silly hen-shaped egg-timers and the humiliated tears we shed about elusive sanitary towels are the beautiful and tragic bits that happen in between.

Once you have been to visit the city of Cork, it will be easy to see why the city is often referred to as the food capital of Ireland. While Cork has had its fair share of history, nowadays its vivacity and liveliness helps to blanket the city in fun, warmth and a great atmosphere.

A city break here certainly wouldn’t be out of the question either; with plenty of cheap hotels in Cork from Travelodge, you can enjoy a visit without overstretching the purse strings. There’s a reason why it’s considered to be so high up the Irish food chain – from farmers markets to fine dining meals, the culinary prowess that can be found in and around the city is extensive. 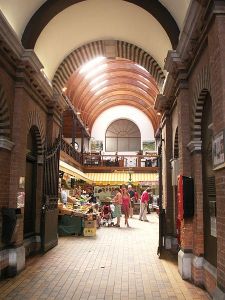 In the centre of town, just off Patrick Street, you will find a multitude of fantastic eateries, while French Church Street and Carey Lane both provide a great selection of cafes and restaurants that will suit all budgets and palates. Restaurants that certainly warrant a reservation include The Cornstore, which dishes up some top quality steaks and seafood while, if you’re up for the drive, the Michelin-starred The House in Ardmore, just across the border in County Waterford, offers up some incredible fine-dining fare which would be perfect for that special meal.

Remember that, when visiting the city of Cork, it’s not just what can be found within its city limits that will impress you – it’s what is waiting for you on the outside, too. Head west and you will find some superb gastropubs that provide a homely welcome with some excellent food on the menu. There’s nothing better than sitting down to an exceptionally prepared meal as you look out over the County Cork countryside. The Poacher’s Inn, in Innishannon (just 20 minutes away from the hubbub of the city), comes particularly recommended, enjoyed by locals and visitors alike.

During your visit, be sure to check out the farmers markets in the city; the English Market sells a vast array of local produce, including meat, fish and artisan cheeses. Don’t forget to sample some of the local delicacies too – tripe, crubeens and drisheen are traditional savouries that should be tried at least once!

Bask in the atmosphere, the joviality and the rich heritage that this city provides with a perfectly-timed break to Cork.

Some people think looking for a flat is stressful.

I love poking around strangers’ homes.

LSB and I have been doing a lot of it lately.

In fact, it’s turned into quite a nasty little habit.

It began last month, when I developed an epistolary relationship with an English gentleman named Mr Humphreys. He was advertising an apartment just off Gendarmenmarkt, one of Berlin’s prettiest squares.

Mr Humphreys had bought the property for his daughter while she attended university. Since she had now completed her studies, he was looking to rent it out.

But poor Mr Humphreys was ill and his treatment meant he was unable to travel to Berlin. He was simply keen to rent out his beautiful, affordable apartment to a young couple just like LSB and me.

“You seem to be a very nice person,” Mr Humphreys wrote to me, adding “I can assure you we will not have any problems.”

Mr Humphreys had a formal, near-native prose style. He offered to send me the keys to his apartment. The rest, he said, would be taken care of by a letting agency.

There was just one small matter. In exchange for mailing us the keys, he required €1,340 to be transferred to his account – so we could “trust each other.”

I thought I might trust Mr Humphreys more if he agreed to Skype with me. But as well as being in poor health, Mr Humphreys suffered from shyness. Ideally, we would just transfer the money. After all, it would be immediately refunded if we decided not to take the apartment.

While I was corresponding with Mr Humphreys, LSB decided to check out our future address. It was a Chinese restaurant.

And as much as it pained me, I concluded my correspondence with Mr Humphreys.

LSB and I then narrowed our search to flats which existed.