Regular readers know I’m more than a bit of a creep. I stare unashamedly at strangers and note down snippets of conversations I hear on trains. And – no I am not joking, LSB got me a periscope for Christmas.

So, despite the well-documented tedium of finding a flat in Berlin and a certain Mr Humphreys who tried to scam me into moving into a restaurant, looking for a flat over the past few months has provided me with a welcome opportunity to poke around thirteen strangers’ homes without getting arrested. 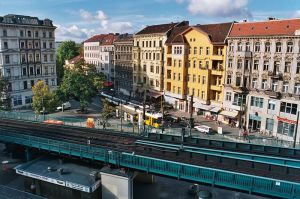 One such stranger was Jürgen. He and his wife were giving up their apartment in Prenzlauerberg to move into something bigger. Their neat second-floor flat overlooked a street full of restored period houses which had been painted green.

LSB and I were only vaguely interested in the flat because the advertisement had mentioned that applicants willing to buy the in-built hall cupboard for €1300 would be preferred.

The moment we walked in we knew it was not for us. The flat was oddly misshapen – a hexagonal kitchen jutted left off the hallway and the bedroom straight ahead was small and windowless. It looked vaguely like the nearby bar dedicated to life in the GDR.

But we continued on anyway, browsing awkwardly and exchanging false smiles with our prospective competitors. As we were trying to make a beeline for the front door, Jürgen – bespectacled, earnest and thoroughly decent- caught us.

(We had decided that when looking for flats, we would play by ear whether to tell people that LSB was only beginning to learn German. In some cases, I simply translated and in others, people were all too eager to practise their English.)

Jürgen however was unconcerned about LSB’s language skills. All he wanted to talk about was his hall cupboard.

“Schau mal,” he said, opening a long mirrored door. “I built this myself. It is a perfect fit.” 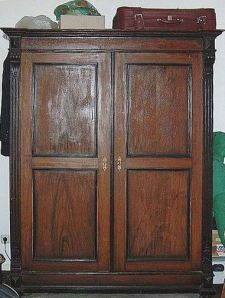 An entirely different cupboard which I probably would pay for. Source: Wikipedia

“And take a look at this!” he said, showing us some shelf fittings.

We listened politely as Jürgen continued to speak extensively about his carpentry.

Every now and then, LSB nodded in confusion and said: “Ah!”

Jürgen, delighted with the enthusiastic, if deferential response, pulled open yet another door.

This went on for ten minutes and concluded with: “A better cupboard for this spot you will not get.”

Back on the street, LSB said: “I didn’t understand a word of that.”

I didn’t understand much, either.

But I liked Jürgen. He was an uncomplicated, dignified kind of person who took great pleasure from his work. There was nothing cynical about his spiel. He really just wanted to speak at length about his self-built cupboards.

Tania from Tiergarten, on the other hand, did not wish to speak at length.

When we arrived for a private viewing of her apartment, she opened the door slightly and said: “Schuhe aus!”

LSB and I almost tripped over each other in the attempt to remove our shoes at speed.

We proceeded in and received a swift, efficient tour of the airy apartment, which we learned was to be rented out unfurnished.

The most remarkable thing about the bedroom was a colossal square of purple on the otherwise white-painted wall.

Tania motioned to a large tin of paint sitting on a table.

“Should you take the place, you will be contractually obliged to paint over the purple square. I have purchased paint for the purpose. I don’t have time to do it.”

We nodded. We would learn to do a lot of that as our flat hunt continued.

Next up was a flat in Friedrichshain, a punk-friendly area in the east of the city where I lived when I first moved here.

Tim, the young man offering the flat, was a DJ who was going travelling for a year.

The entrance hall of the large front house was like a cringeworthy movie set dedicated to Berlin’s “alternative scene.” No centimetre of the wall was free of graffiti, which featured slogans such as “Fuck the police,” “The revolution begins now” and “Go vegan.” 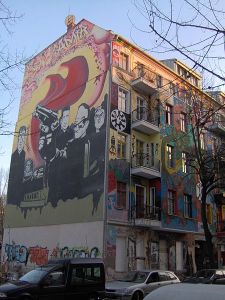 A house in Friedrichshain (not the one we went to) source: Wikipdia

It was horribly dirty. To get into Tim’s flat, we had to cross a pitch-black yard. As we were making our way to the door, a large terrier bounded at us out of the darkness. I didn’t scream. When I am terrified, I go mute.

We made our way up the graffitied stairway to Tim’s place and rang the bell.

Tim had shaggy hair and glasses.

“Hey, you guys,” he said. “You found it! I know the buildings are pretty run-down man, but you got the best one here.”

The flat stank of smoke. Tim led us past the kitchen, where a pile of dirty dishes towered next to the sink. There were hundreds of records on the shelves in the hallway.

In the living room was a tatty armchair and a fridge. “For the beer! Nothing better than having a nice beer ready for you when you stumble home at 4 am!”

LSB and I nodded excessively.

“And of course you guys can smoke in here! No problem at all,” said Tim.

“The only thing really,” said Tim – “don’t touch the records. At all. They are my babies.”

We saw ten other places. Writing about them all would be boring.

Suffice it to say, one of the strangers became our friend. It’s unsurprising really because she has a corner couch and a Goethe quotation painted on the wall. I’d be lying if I said I’d always wanted a Goethe quote, but the corner couch has been a dream of mine for quite some time. She also has a copious supply of kitchen utensils.

She left us a crate of beer, a charming welcome note and plenty of shelf space.

LSB and I have colour-coded our books. We have a red, blue, green and yellow section.

And even though our small, north-facing balcony overlooks a car park, there is a school building across the way.

Some mornings, I peek out from behind the curtains and try to make out the teacher’s power point presentations.

Some people think looking for a flat is stressful.

I love poking around strangers’ homes.

LSB and I have been doing a lot of it lately.

In fact, it’s turned into quite a nasty little habit.

It began last month, when I developed an epistolary relationship with an English gentleman named Mr Humphreys. He was advertising an apartment just off Gendarmenmarkt, one of Berlin’s prettiest squares.

Mr Humphreys had bought the property for his daughter while she attended university. Since she had now completed her studies, he was looking to rent it out.

But poor Mr Humphreys was ill and his treatment meant he was unable to travel to Berlin. He was simply keen to rent out his beautiful, affordable apartment to a young couple just like LSB and me.

“You seem to be a very nice person,” Mr Humphreys wrote to me, adding “I can assure you we will not have any problems.”

Mr Humphreys had a formal, near-native prose style. He offered to send me the keys to his apartment. The rest, he said, would be taken care of by a letting agency. 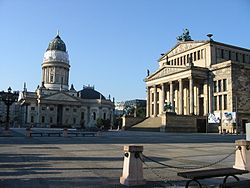 There was just one small matter. In exchange for mailing us the keys, he required €1,340 to be transferred to his account – so we could “trust each other.”

I thought I might trust Mr Humphreys more if he agreed to Skype with me. But as well as being in poor health, Mr Humphreys suffered from shyness. Ideally, we would just transfer the money. After all, it would be immediately refunded if we decided not to take the apartment.

While I was corresponding with Mr Humphreys, LSB decided to check out our future address. It was a Chinese restaurant.

And as much as it pained me, I concluded my correspondence with Mr Humphreys.

LSB and I then narrowed our search to flats which existed.