When I was at school, it was considered polite to put on the hand dryers in the bathroom while somebody else was peeing. One day I went into the toilet and straight past two Cool Girls, who were applying lip gloss and scowling in the mirror. I started doing my business but the dryer didn’t come on.

I kept on peeing, as you do. When I came out, instead of saying something witty or challenging like “Oh, so your magic lip gloss makes you pee silently then, does it?” I stared at them, long and hard.

They might have thought it was a look of defiance but in fact it was shameless curiosity. I was always trying to figure out how Cool Girls worked. Now that I knew they’d never heard the sound of peeing before, I was wondering whether they had extraordinary bladder control, or whether they struck underhand deals with each other about manning the dryer: I’ll lend you my sparkly eye shadow in exchange for three shifts by the dryer next Tuesday… No? Oh fine, go on then, I’ll throw in a go of my bronzer too. Sheesh, you’re a tough bargain. Okay, done…

You should never underestimate the effort that goes into being a Cool Girl. Once I was in the bathroom tucking my shirt into my oversized trousers, when I noticed a Cool Girl adjusting her navy knee socks, a couple of millimetres at a time. I tried to look sympathetic, thinking she had an itch. But when she saw me looking she said, “It’s the fake tan.” I wanted to say something really in the know like “Oh I bet it’s St Tropez – such a pain .. try Rimmel, hon” but instead I just kept watching her.

She must have been having a weak moment because we got talking. She told me all about how she applied tan every morning but only on the bits of skin that were exposed by the school uniform. That meant that as well as her perfect golden face and sleek neck, she had to cover the couple of inches between where her socks ended and her skirt began and where her t-shirt ended and her tiny little arms began. It sounded like solid honest work requiring patience and precision, like old ladies sewing outfits for tiny dolls. I was full of awe. I didn’t even shower every day. 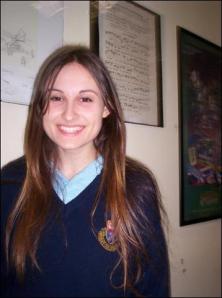 The only time I ever tried fake tan I was with my best friend. We thought we’d try it in a safe environment so that if we had any side effects we’d have a support network around us. We wanted to remember what it’d be like so we decided we’d do it on the night of the school production. Even though the two of us are naturally exceptionally gifted actresses, who chose to devote ourselves to the lucrative study of humanities over the stage, we were given identical, very minor roles. We were “reporter 1 and 2,” which is kind of funny when you think about it because I’m still in that role now.

Anyway, we decided we’d pep up our image a bit by dressing all sexy. You wouldn’t believe how easy that is. Just put on a really short skirt and super high heels and there you have it. It was strategic really because what’s the point of fake tan if you’ve only got a tiny bit of skin to cover. (That was during the Celtic Tiger days, before rationing came in).

So I whipped out the tube and hurled a couple of globs at my thigh. I could feel my cool factor rise with every smear. It all got terribly streaky but we didn’t let that get in the way of anything. We were sexy reporters and streaks were part of our feminine mystique.

Streaks were also part of my feminine mystique when I got orange highlights but that’s another story altogether.

Anyway, just before the production, all the Cool Girls came into the bathroom to touch up on their fake tan. Some of them were opting for the strip and re-apply method, which I’ve heard is also the right one if you’re thinking of re-wallpapering.

One of them shouted out: “Anyone got some toothpaste for this?”

Now I’m not good on general knowledge, but I had picked up somewhere in the Corridors of Cool that toothpaste was an excellent way of getting rid of fake tan. I was staying over at my best friend’s house that night so naturally I’d packed a nice little collection of toiletries.

“I’ve some,” I cried out, cautiously at first and then triumphant, as I saw the hungry eyes flickering in my direction.

The Cool Girls formed an orderly queue. At first I was overcome by the novelty of being such a sensation but after a while, I got little perturbed by how quickly my Colgate was disappearing. After the seventh Cool Girl had squeezed out a much-too-generous glob of it and abandoned the tube on the floor, I picked it up. It looked limp, dejected and betrayed.