I never thought I would be reading Bertrand Russell on the bus. Having endured a term of Critical Theory at college and made an ill-conceived investment in the accompanying reader (I was a Fresher; young and naive), I came to the conclusion that part of a Philosopher’s delight lies in deliberately employing obscure words and a surplus of relative clauses and that the general intention is to make oneself incomprehensible.

Not so with Bertrand Russell. You can read his prose while listening to snippets of conversations from the St Mary’s boys, the hum of the engine and the relentless beat of rain against the window pane.

As I was reading his essay On Being Modern Minded last week, I was struck by how much I could relate what he was saying to my own relationship to the world around me. Russell’s main argument is that the modern (post first world war) mind is stifled by an ever-increasing reliance on trends in thinking and that as a result people are scared to form their own judgements; held back by the belief that a more ‘contemporarary’ (and accepted) view will appear before they have had the chance to formulate their own.

Russell’s observations were rooted in the growing popularity of new philosophies and the tendency to impose them retrospectively on texts. Russell writes: “I read some years ago a contemptuous review of a book by Santayana, mentioning an essay on Hamlet ‘dated, in every sense, 1908’- as if what has been discovered since then made any earlier appreciation of Shakespeare irrelevant and comparatively superficial. It did not occur to the reviewer that his review was ‘dated, in every sense, 1936′”.

Russell was writing pre-Internet of course but in his world, ideas were moving more quickly than they had ever done before and at a speed that meant they were evolving before they could be fully digested. That may be why the behaviourism of the 1960’s led to some dubious parenting practices and why literary texts developed Marxist, then Freudian undertones overnight.

Our generation has the great advantage of easy access to a vast quantity of information so that any new tenet may at the click of a button be analysed in relation to the belief that preceded it. However, with such a vast amount of information available, it has become easier and easier to quit thinking for yourself.

I’m definitely guilty of this. Look at this blog post for instance: it’s Bertrand’s, not my own. Sure, we’re supposed to learn from each other but the amount of times I encounter something that seems at first glance incomprehensible and resolve to “google it” makes me uncomfortable. Am I incapable of assessing the importance of a news story myself? Can I not figure out what Joyce was about by reading his words alone? Have I lost my originality? (Can I google it?..)

Skimming is a skill I’m now supposed to teach and it’s something I’m not quite comfortable with. Sure, it’s practically important to teach students to find relevant information at speed but doesn’t that take the joy away from the ultimately satifying slog of analysing a text to identify grammatical structures and unusual vocabulary? Would we be as well as to teach them to use google translate to extract the main points of a text?

I love the internet. It’s enabling, democratic and wonderful. Without a lot of self discipline though, it can also be disabling and anti-democratic, with messages being spread and consumned at a rate the human brain is incapable of keeping track of. If BR thought in 1950 that “The emotional tone of the world changes with equal rapidity, as wars, depressions, and revolutions chase each other across the stage. And public events impinge upon private lives more forcibly than in former days”, I don’t know what he’d think of the world as it is today. One to ponder.

Echart Tolle is all about living in the present and listening to the senses. I hear him speaking on the John Murray show before rushing out (naturally..) to get my hair cut. Although I am power-walking with intent, I pretend that I am hanging out sensualy without purpose. I take note of the dark and crunchy leaves on Mountpleasant Avenue and mould the relative smoothness of its concrete path into an aesthetic pleasure. Before I can wait for the little green man, the traffic at Portobello has glided to a sublime appreciation of life’s industrial hum.

I arrive in Stephen’s Green breathless but full of life. Unfortunately I have no cash, so after a mindful trip to the ATM machine I arrive a respectable seven minutes late for my appointment. As usual, I am getting my hair cut by trainees. You can tell that they are trainees because they listen carefully to what you tell them you want done and before they begin, they ask you if your scalp ever gets itchy, because they have been told to ask this question. As I am getting a bib wrapped around me like a baby, I watch the group of ten girls who are taking a class in the corner of the salon. They are creating elaborate ballroom styles on uniformly attractive mannequin heads. Agreeing with Michelle, my stylist that I am a ‘medium-dark blend’ of a person with a penchant for autumn colours, I begin to flick through Marie Claire and alight at the few pages which boast sustained passages of prose. I stumble across three articles on the same theme: living in the moment. It seems to be the mantra of  my day. One is written by a woman who had a lesbian relationship with her best friend after (and later while) being in a relationship with the father of her child. The next is a story of contented single life by a woman in her late 30s, who now befriends rather than resents her many exes. The last tells of the regrets of an Oxford graduate for feeling intimidated by her toff-ee friends for three years instead of quitting after one and joining Smash Hit magazine as had always been her dream.

I like self-help. I think the idea of ‘living in the moment’ is fascinating. The scientist in me wants to find out:can it be? Is Echart Tolle really motivated to have a chat with Dawkins, Gaybo and Murray by an appreciation of the quotidian or is he, like most of us, drawn to the notion of acclaim? It’s difficult to ‘live in the moment’ when you are a (nearly totally) unemployed graduate still living at home. After yet another job rejection yesterday morning, I think I may be ready to disregard the future though.  The past; dull and continuous might just have to come second to the present, which (while tense) is reassuringly habitual. I am not getting started on the conditional, but Echart Tolle would be proud. 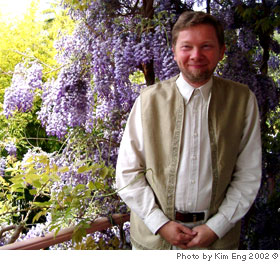 Me shorn.. for the moment