Pundits will point to the refugee crisis, the concurrent surge in right-wing populist sentiment elsewhere in the world, and the significant minority of Germans suffering from Merkel fatigue.

But these factors go only so far to explain how a party whose campaign featured slogans like “Burkas? We prefer bikinis” and “New Germans? We’ll make them ourselves” could succeed in a country that, ostensibly at least, remains traumatised by the atrocities committed in its Nazi past.

One of many openly racist AfD campaign posters

One truth likely to be overlooked is that  while the outrage may have been large, the resistance was not. 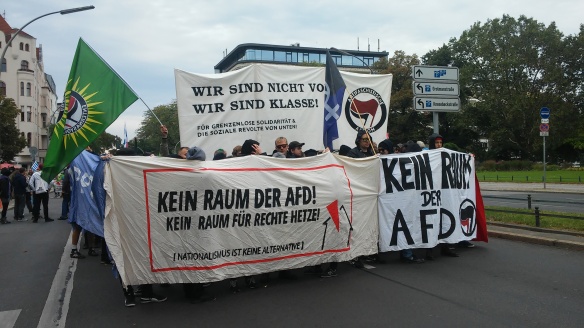 Protest setting off from Savignyplatz

This isn’t to say that there was no resistance; it just wasn’t as sizeable as you might expect.

On Saturday afternoon, on the eve of this potentially momentous event in German post-war history, a group of a few hundred people in Berlin did resist.

Draped in rainbow flags and carrying banners that read “Stop the AfD,” they gathered by a patch of green at Savignyplatz in the leafy, well-to-do district of Charlottenburg in the west of the city.

It was a carefully chosen location. Antifa, the self-described “radical left” organisers of the protest, have identified Charlottenburg as a hot-bed of the far-right. Their specific aim is to erode the institutions that facilitate its activities.

This was clearly reflected in the route chosen for the march.

Their first stop was Schlüterstrasse 32, where Carsten Schrank, a lawyer known for defending members of the neo-Nazi NPD group, has his office.

Then it was on to the Bibliothek des Konservatismus (Library of Conservatism) on Fasanenstrasse, an institution established in 2012 to house a collection of right-wing literature and serve as a meeting point for far-right sympathisers.

Another significant stop: Hardenbergstrasse  12, home to the offices of the Berliner Medien Vertrieb (Berlin Media Distribution) which manages the publication of the far-right weekly newspaper Junge Freiheit.  If  you are looking for an insight into their editorial stance, a current poll is titled “Sex attacks: Is Germany a safe country for women?”

As the protesters stood outside these places, they chanted slogans like: “AfD Rassistenpack!Wir haben euch zum Kotzen satt.” (AfD: racist crew. We’re sick to death of  you!) and “Say it loud, say it clear: Refugees are welcome here!”

The first half of the march passed without incident. The mood was largely one of joyful defiance, with police and protesters respecting each other’s boundaries.

This changed when the group got to Ernst-Reuter-Platz. The traffic junction, near Berlin’s Technical University, features a large patch of grass which all the political parties have used to accommodate their largest campaign billboards.

Some of these, including one featuring Merkel’s Social Democratic challenger Martin Schulz, had been defaced, with the word “NEGER” (nigger) strewn across it in large black letters.

When the protesters saw this, a handful of them reacted impulsively and slapped their Antifa stickers and posters over the offensive word.

In response, the police detained two of those responsible, accusing them of Sachschaden, or property damage.

Unsurprisingly, this elicited a furious response from the crowd. The protest ground to a standstill as angry demonstrators yelled at the police to let their friends go.

A heated exchange took place between an old woman and a young policeman near the scene of the action:

“So you’d rather the word ‘Nigger’ stayed on the placard?” she asked.

“So how come the people covering up the racial slur get in trouble but those who put it there in the first place don’t?”

“They’re two separate incidents,” he said. “Both amount to property damage. Both will be investigated. Our job is to uphold the rule of law. That’s what we’re doing here.”

“Just following orders,” another protester interjected derisively, a thinly veiled reference to the defence used by those who co-operated with the Nazi regime.

The two men were eventually let go on the proviso that a report into the alleged property damage would be compiled.

The march eventually moved on towards its final destination on Otto-Suhr-Allee, a long, impressive boulevard that bears the scars of its bombardment during the war.

As the demonstrators made their way down the street, they encountered their first hecklers.

You had to look upwards to see them.

On a balcony on the second floor of a drab apartment block, two men and a woman were chanting “AfD, AfD!”

Locals chant “AfD, AfD” as protest passes them by

This unleashed a furious response. Protesters gave them the finger. And the trio responded in kind, clenching their fists and gesturing to the crowd as if to ask: “you want to come up here for a fight?”

The moment passed. But it was a strange and unnerving one.

This incident happened only a short walk away from the march’s final destination: 102 Otto-Suhr-Allee.

It’s the address of the Ratskeller restaurant. Attached to the imposing historical town hall building, it has become a regular haunt for members of the AfD.

A row of police officers guarded the restaurant’s entrance as a member of the West Berlin branch of Antifa chronicled the Ratskeller’s history of hosting far-right groups.

In the 1990s, it allegedly welcomed members of Die Republikaner, a largely unsuccessful party that positions itself firmly to the right of the Conservative CDU and runs on an anti-immigration platform.

In the following years, it also supposedly hosted the so-called Tuesday Conversations (‘Dienstagsgespräche’), a closed event where members of the far-right exchange ideas.

And in 2016, it was here the AfD celebrated its entry into Berlin’s Senate.

The plan had in fact been for the AfD  to hold its election party here on Sunday night. But, prompted – one can strongly suspect – by lobbying from Antifa, the event was called off on short notice.

When this news was delivered via mega speaker, a cheer erupted from the crowd.

But there was resignation too. The party would take place elsewhere and the Ratskeller was likely to continue to host the AfD’s regular meet-ups.

The protest ended with an announcement that Solitrinken, or “drinks of solidarity” would be taking place that evening to raise money for a Ghanaian asylum-seeker awaiting deportation.

By the time he leaves the country, the AfD will have entered parliament on an election program that identifies “a relationship between crime and foreigners” and describes an increase in the number of Muslims as  a “threat to peace.”