Reader, I married him.

In a tower in the forest.

On a wet and windy August afternoon.

“Pity about the weather,” the florist said when I appeared, drenched, to pick up my bridal bouquet.

“Wrong weather, right man,” I quipped, a little too enthusiastically.

We took a taxi to the forest.

LSB, gallant as well as handsome in a three-piece suit, held a giant pink umbrella over my head as I clambered in with my sopping bouquet.

The driver appeared indifferent to our finery.

“We’re getting married,” I said, in case clarification was needed.

He nodded. “What’s the address?”

The windscreen wipers swished back and forth.

“The weather could be better,” the driver said, finally.

“Wrong weather, right man,” I quipped, a little too enthusiastically.

On arrival at the tower, we held a conference with the manager.

“How hardy are your guests?” she asked.

I thought about our Irish cohort. All but the youngest had survived at least one recession, years of rule by the Catholic Church and the indignity of immersion heaters.

Then I thought about our Bavarian relatives. My mother is one of nine. They are Nachkriegskinder – or “post-war children” – a generation constantly reminded of the horrors they narrowly escaped.

“Very well,” she said. “We’ll do the ceremony outside.”

LSB and I walked down the aisle to the Queen of Sheba, played beautifully on the violin by my cousin and sister.

Everyone gazed at us benignly, snapping pictures as if we were a Very Important Couple indeed.

This, I thought, is what it feels like to be the Duchess of Cambridge.

The celebrants, two of our best friends, performed their roles superbly, holding fast to their flimsy folders as gusts of wind attacked its pages.

LSB and I took turns to read this poem. A friend sang. Another read The Trees by Philip Larkin.

And we planted an olive tree. (Or at least we moved it, ceremoniously, from one pot to another.)

We also let off 50 red balloons, one more, apparently, than local authorities allow.

But the highlight for many came later, with the performance of my Bavarian family’s choir. Members had disappeared discreetly after dinner. Later they paraded in, singing a traditional Bavarian wedding song in cannon. They brought the house down.

We did a first dance too, one of the few concessions we made to convention.

It was an awkward but happy shuffle.

“We did it,” LSH whispered to me as we took a look around at all of the people we love, gathered together.

“We sure did,” I said giddily, swerving to avoid his toes.

We gestured wildly to our friends and family and soon the dancefloor was packed with people, boogying joyously to a playlist we’d compiled with the help of YouTube autoplay. (If you need 100 classically cheesy tracks in one place, write to me).

It was a glorious day, made so by the people who honored us with their presence.

We returned to the island of Rügen for our honeymoon and found the rock, where one year earlier, we’d said yes.

There were no swans this year.

But as we stood there, gazing out to sea, we remembered how they’d drifted past – showing us this point in time. 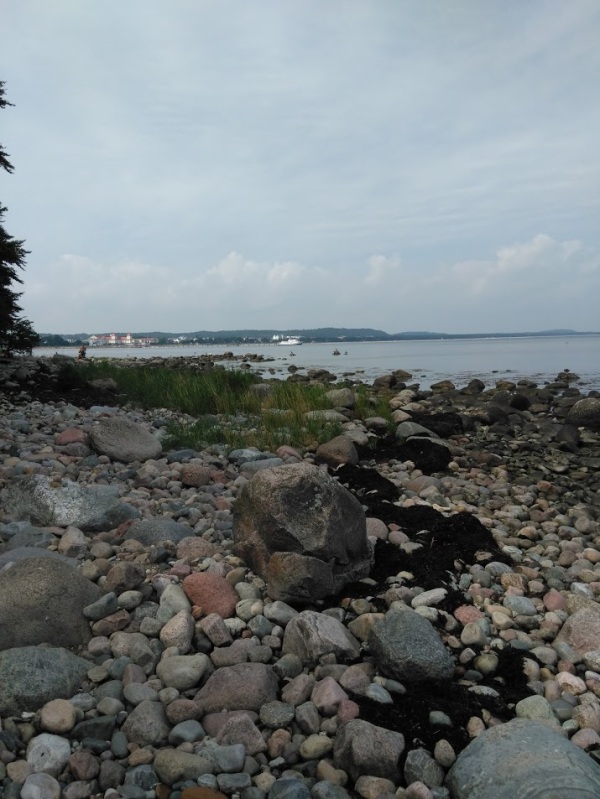 The rock, where we said yes.