He sighs wistfully. “Ah my dear teacher, you need practise long time!” It’s Tuesday morning, the day after my first Arabic class and I’ve just greeted my student with “kayf halaka” (كيف حالك) or “howeyeah”. It’s not that he doesn’t appreciate my effort, but apparently, my ‘ks’ are too harsh and like most people, I can’t master the breathy ‘H’, which is unique to Arabic. They say it sounds like you’re breathing onto a pair of glasses as if to clean them, but given that I’m blessed with 20:20 vision and that my windows are filthy, it’s something that’s going to take time.

Another girl looks surprised and then disgusted when I say “tibn” (تبن) to her. “Teacher, that not good word”, she says.
“What, why?!” I ask.

I’m a little indignant. After all, it’s in Chapter 1 of Mastering Arabic and it means “hay”. Not the most essential word for a slick city dweller like myself, but on the other hand, it uses the three letters introduced on page 2.

“It not good in Arabic”, she repeats patiently.
A more outspoken classmate chimes in:
“Teacher, it mean shit”.

Oh. So on top of having to read backwards, learn a 28 letter alphabet whose letters change form depending on their position in the word, and bizarre sounds only the visually impaired can achieve, I also have to bear in mind that my precious beginner’s textbook isn’t forthcoming in differentiating between horsefood and horseshit. I love a good challenge I do.

Anyway, some time ago I asked you all to make suggestions for what you’d like to see in my Arabic posts. One loyal and lovely reader suggested more about culture and language, less about politics. I breathed (not the ‘soft, on glasses kind) a sigh of relief. I had appealed in that post for suggestions on a postcard, but stipulated that should I not be considered worthy of a stamp, I would also accept suggestions submitted electronically.

Well, guess what happened. Last Sunday evening, I came home to find a postcard through my door from a magical friend, who happens to have just forsaken me for life in London. She had been clearing out her room and found a postcard from San Francisco which she’d never sent. On her very last afternoon here, she wrote an adorable piece of prose, included a suggestion for my Arabic series, stuck a 55 cent stamp on the postcard, and hand-delivered it. I’ve attached it with a wooden peg to my “poetree”, a cluster of branches which I keep in a pot on my mantlepiece and which I decorate with meaningful paraphenalia. 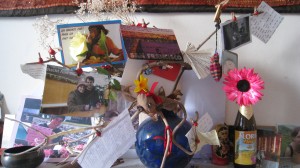 In honour of the two loyal readers, who together made the response to my request “overwhelming”, I will post a summation of what I have learnt to date after my second Arabic class tomorrow. If you’re really stuck until then, just remember to keep your glasses clean, and to learn how to pronounce “shit” before you put your foot in it.

2 thoughts on ““Hay” there: Arabic shit and how to put your foot in it”