Nobody – not even the New York Times is safe from the digital revolution. That’s the message of Page One: Inside the New York Times , a docu-film -showing at the IFI this week, which follows editors and writers at the publication as they respond to falling revenue, new media outlets and the speed of social networking. Most of the scenes come from inside the NYT Headquarters and feature an array of high-strung, high-functioning individuals in front of multiple computer screens, yelling down the phone, exchanging smart comments and looking like they’re about to boil over as individually they compete for space in the publication and collectively fight for their survival.

Footage is taken from between 2008 and 2010 and while there’s no obvious narrative structure, we’re gradually introduced to key figures, like David Carr, staff writer, former crack addict and in-house character. We get a glimpse of the dilemma facing the publication as wikileaks arrives onto the scene and bewilders the world by posting videos of disturbing war scenes on youtube. We get the first reactions (what’s wikileaks?) to the final question over whether collaborating with the Guardian and Der Spiegel to release wikileaks’ wires renders Assange a source or an associate. 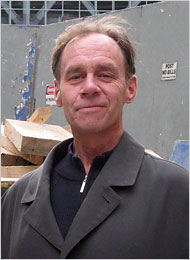 Comparisons are made between The Watergate scandal, which broke over the course of a year and a half’s reporting – primarily by Bob Woodward and Carl Bernstein of The Washington Post- and Assagne’s overnight release of a vast quantity of sensitive material for pubic perusal. We get the sense that the source of power is changing: where Woodward and Bernstein relied on the Washington Post to distribute their findings, now The New York Times depends in part on Assange’s willingness to use it as his outlet.

Page One documents the complexity of the relationship between The New York Times and Assange. Granted it’s symbiotic but in comparison to the media landscape of the 1970s a disproportionate amount of power lies with the source. Assagne benefits from the relationship because his material becomes associated with a credible source but The New York Times faces the uneasy task of ‘keeping up’ with a story that’s developing faster than it can be be digested.

Furthermore, we can see how The New York Times is taking a risk with Assange: how can they substantiate a source that describes himself as espousing the “values of activism” over those associated with journalism. What does that even mean?

Page One asks the questions it cannot answer. How can print media sustain itself? How is the role of journalists changing?

Newspapers didn’t predict that advertising revenue would disappear with the rise of the internet. They weren’t ready for the arrival of websites that featured classifieds and for the advent of faster, flashier, funkier outlets like gawker.com.

Things changed fundamentally in about 18 months, an insider tells the camera.

In the course of filming, 100 odd people are let go. The deputy obit editor has been there for over 20 years and takes voluntary leave. The Books and Arts editor seems on the way out too. We watch a teary few words from somebody leaving. Gathered about her are her colleagues applauding numbly. We get a shot of the enormous multi-storeyed newsroom and the tiny cluster of people gathered about the retiring journalist. It’s an image of resilience but the journalists appear tiny amongst their overwhelming surroundings.

The newsroom atmosphere has always been one of high-tension but in Page One we really get a sense of individuals constantly on the verge of boiling over. They’re always nibbling, always minimising windows on their computer screens while firing questions down the phone and gesturing to their colleagues to get things done. Where they excel though is in their attention to getting it right: there’s constant debate over what should go in and at two daily meetings, editors must justify their content. They’re still all about reporting from the ground, and there’s a sober clip of a goodbye party for a young correspondent being sent to Iraq. As the credits roll we find out that he has become chief Bagdhad correspondent.

Page One does a good job of documenting the uncertainty that surrounds The New York Times, along with all other print media. Unconsciously it documents what might be its saving grace – attention to detail, passion, unbrdidled dedication to getting it right and the conviction that a journalist’s place is first on the ground, and then on twitter.

Page One – Inside the New York Times is showing twice daily in the IFI until Friday 29 September. 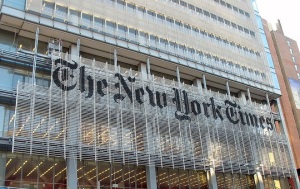 4 thoughts on “Page One – Inside the New York Times: The Future of Print Journalism”