Being right-wing in Berlin is like turning up to a steak house and announcing you’re a vegetarian. At best, it’s a mild provocation and at worst, downright offensive. Being young and right-wing is akin to adding that you can’t have the burger buns either, because you’ve decided to go gluten-free.

A primal curiosity for the proverbially maligned vegetarian prompted me to make my way to the leafy district of Zehlendorf on Thursday evening for a meeting of the youth branch of the far-right AfD (‘Alternative for Germany’) party. 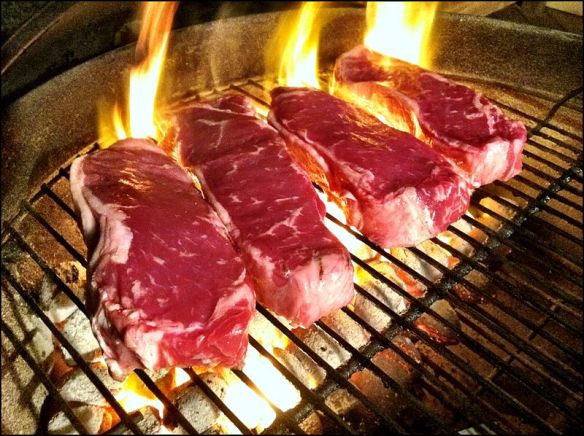 Getting to this point had been no walk in the park. Unsurprisingly, the ‘Junge Alternative’ (‘Young Alternatives’) do not disclose the location of their monthly meetings on the Internet. Instead, they ask prospective attendees to send an e-mail to the party to register their interest. I got through that step and when I wrote to thank the individual I’d been dealing with (he turned out to be one of the group’s three deputy chairpersons) he replied that the “license fee should, after all, be justified.”

It was accompanied by a winky emoticon but the implication was clear: he’d Googled me and discovered the identity of my employer. After all, I’d never mentioned being a journalist.

It was only a mild provocation but it foreshadowed the offensive he was to launch when we met in person.

From the outside, the façade seemed like a highly unlikely meeting point for Germany’s right-wing youth. A generous, gated two-storey house in a residential area, it was the kind of nondescript place you might imagine one of your posher friends to have grown up in.

The meeting took place in a backroom, which had been converted into a bizarre kind of pub. The young man I’d been communicating with via e-mail was standing behind the bar. He was wearing suspenders.

People came and went but there were about a dozen of us at any given time. If I had to guess, morbid curiosity had attracted at least three others to the event. The rest were hard-core members. I’d expected some formalities but soon realised the evening was to offer something far more enlightening: a drinking session.

These are the fragmented stories of four individuals I spoke to over the course of the evening.

The first was a young woman from Swabia, who’d welcomed me and shown me where to hang my coat when I arrived.

(For readers outside Germany, Swabia is a region in the south-west associated with either good old-fashioned values or bourgeois pettiness, depending on where you stand politically. The stereotype of Swabians as hardworking but miserly is common in Germany and casual racism directed at Swabians is alarmingly widespread in Berlin. An airport bus run by the BVG transport company even features the slogan “Dear Swabians, we’ll gladly take you to the airport.”)

This young woman found her move from Swabia to Berlin a challenge. “I found it hard to get used to everyone being late,” she told me. “Where I come from, things happen on time. You turn up when you’re supposed to, you eat lunch at 12 pm. It’s how it goes.”

She struck me as a sensitive, conscientious type and I can imagine the brashness and condescension she encountered in the capital felt like an affront. “I used to be in the CDU,” she said. “But I felt completely betrayed by them.” She was referring to Angela Merkel’s decision to open the door to refugees.  “Without borders, we are no longer a country.”

In late 2015, she applied to join the AfD. Weeks later, on New Year’s Eve, a wave of sexual assaults took place in Cologne. They appeared to have been coordinated and carried out by both asylum-seekers and refugees.

The police’s slow response and apparent reluctance to release information about the origins of the suspects caused consternation and eventually led to the resignation of the city’s police chief.

“It was at that point I knew I’d made the right decision to join the AfD,” she said.

Another young man I talked to had come to the party as a Christian who felt it provided a safe platform to express his conservative values.

“I feel like these days, the traditional family structure is hardly represented anymore,” he said. “You know, mother, father, child… I’m not saying that alternative structures like homosexuality are necessarily wrong but I feel like the conventional way no longer gets a look in.”

An opponent of abortion, he said the AfD allowed him  to air his views freely, even if they didn’t necessarily reflect the party line. He also told me he believes the state should provide subsidies for families who choose to keep one parent at home to look after the children.

In the context of what he perceives as a movement to strip people of their right to feel proud of where they came from, he mentioned his reverence for his grandfather, who had a clock-making business which the post-war East German Communist regime tried to suppress.

Like the young woman I’d talked to, he seemed like someone who felt the modern world was denying him the right to hold fast to his values.

The third person I spoke to was by far the most intriguing. He immediately piqued my interest because his German, both fluent and a tad academic, had a hint of an accent I couldn’t identify. He turned out to be an American and an enthusiastic supporter of Donald Trump. “I was behind him from the very start,” he said. “He is the best thing ever.”

Having studied German, he moved to Berlin in 2012, where he now works for the AfD. When I asked him what it was specifically that he did, he responded politely that it was nothing personal, but he didn’t want to tell me in case it was “all over Deutsche Welle tomorrow.” I assured him that I was at the meeting in a personal capacity and not on behalf of DW but, wisely perhaps, he insisted on keeping his job description under his hat. Fascinatingly, being a foreigner (and ineligible to vote in national elections) in a notoriously anti-immigrant party did not seem to faze him.

In the interests of not playing into the hands of my suspender-wearing correspondent, I have deliberately kept a description of our encounter to last.

As I mentioned earlier, he’d done his research on me, and laid his cards out on the table pretty early on.

I, for my part, had kept mine closer to my chest. I knew he was a law student who’d stood for regional elections last year and that one of his main concerns appeared to be a decision by Humboldt University to change the name of their Student Union from Studentenwerk to Studierendenwerk at a cost, he claims of €800,000. The subtlety is lost in the English language, but the new term neutralises the gender of the word from “union of male students” to “union of those who study.”

He also lamented the loss of what he described as deutsche Erholungskultur, roughly translated as the culture of German recreation in the city’s central Tiergarten park to what he termed ‘bunter’ Krawallkultur, or ‘colorful’ riot culture.

As far as Internet research went, it was one-all.

At the beginning of the evening, I was treated to an unsolicited appraisal of my journalistic credentials. “I don’t like your work,” he said. “It’s boring and one-sided.”  I was genuinely baffled by what he was referring to but on reflection, I suspect he may have found this article I wrote about my experience of welcoming refugees coming off trains at Schönefeld airport or perhaps this video report featuring a soundbite expressing the opinion that refugees could help boost the Greek economy. 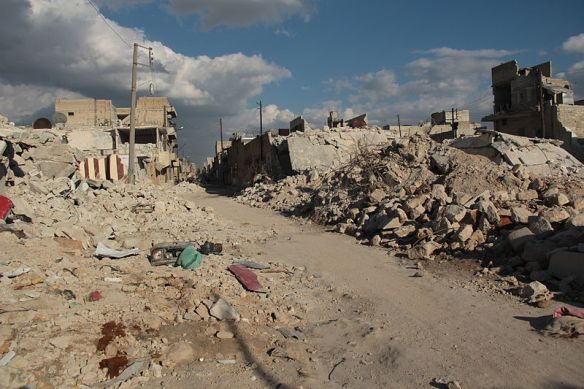 While others I spoke to appeared to have arrived at the party following a personal journey of increasing disenchantment, this young man spoke with totalitarian-style conviction. “You’re either born right-wing or you eventually see sense,” he said.

He maintains that German culture is in the process of being eroded. I asked him several times if he could define the term. He said it was too complex. But he is sure it is being destroyed.

When it came to Syria, he denied that Bashar al-Assad is bombing his own people. This was the only point at which I mildly lost my cool. “Are you serious?”

“He’s bombing Islamic State,” he said, dripping with derision. “And you deny that civilians are dying?” I asked. He eventually conceded that ordinary people were likely to have been caught up in the process.

Still, he maintained that vast swathes of Syria were perfectly safe. “What about Aleppo?” I asked. “Do you think the harrowing images we are seeing are doctored? Overblown?”

“A tiny part is under bombardment,” he said, and told me a story about a refugee he knew who recently returned to Syria and apparently posted pictures of himself having a jolly old time at the beach. “It certainly makes you think,” he said.

When it comes to recruitment, he was keen to advertise the attractions of being a member of the Young AfD. 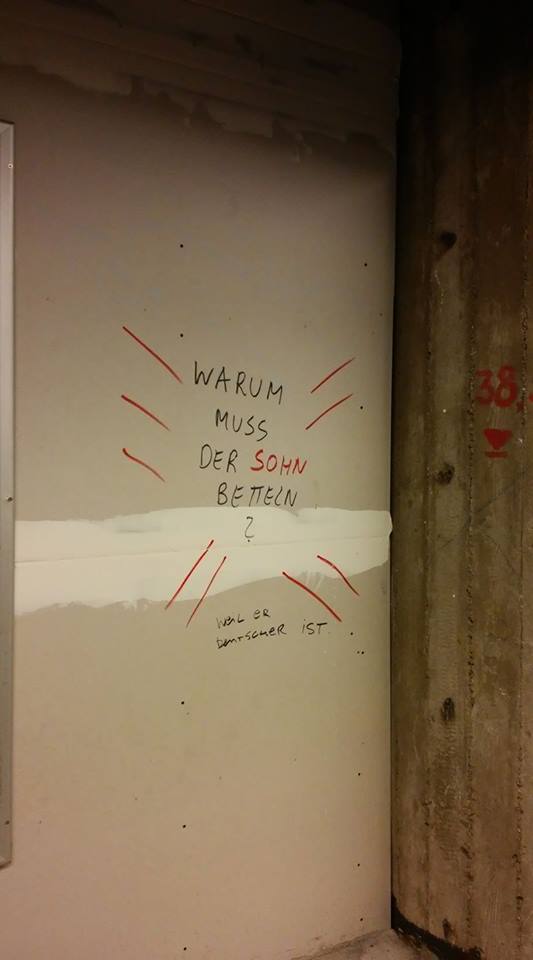 Graffiti I spotted at the train station on the way home.. It says: “Why must my son beg? Because he is German.”

Addressing the three individuals I suspected to be open-minded sceptics, he said: “we provide training in public speaking, we go climbing… we go for beers.” He went on to describe the ‘Junge Alternative’ as “more radical” than its parent and spoke in somewhat scathing terms about the “boring people in their 50s” who come knocking on the youth wing’s door for help navigating the Internet.

Despite riling against the various “extremist” Leftist movements at his university, he did make some concessions:

“If I go drinking with a Communist, we often find after a beer or two, that we’re not actually that far apart.”

When it comes to common ground within the party though, or the elusive “alternative”promised in its name, there was little evidence of either on display.

My dominant impression was of a group of youngsters with profoundly conflicting sensibilities. From a conservative Christian who reveres his clock-making grandfather to a disaffected punctual Swabian and a chirpy American taking on a nationalist cause in a foreign country, this was a group of various misfits bound together by little more than the sense that the world is moving in a direction that doesn’t suit them.

That, however, is no reason to dismiss their potential.

All it might take to gain mainstream approval for a gluten-free, vegetarian option in the steak house, is another terrorist attack on German soil, perpetrated by someone with a foreign-sounding name.