In my final year of university I took a class on Irish women’s writing. Among the works on the reading list was Kate O’Brien’s The Land of Spices. Years later, whenever anyone asks me to name the book I wish I’d written, it’s the title that slips effortlessly off my tongue.

Because it’s everything a novel should be: beautifully crafted and full of psychological insights. Tender yet unsentimental; political but not polemical.

Published and promptly banned in Ireland in 1941, it’s the story of a nun whose life is unalterably shaped by a scene she encounters as a young woman. It’s also about how a little girl with a troubled background awakens in her the very sensibilities from which she has tried to flee.

Re-reading this book as I try my hand at writing something of my own has been a humbling experience. How does she do that? I ask myself. How does she jump across time so smoothly? How does she find the words to describe those micro-moments that occur as we assess each other during a conversation? How does she examine a distant relationship with such subtlety? How does she manage to convey the landscape of Irish nationalism so unflinchingly? 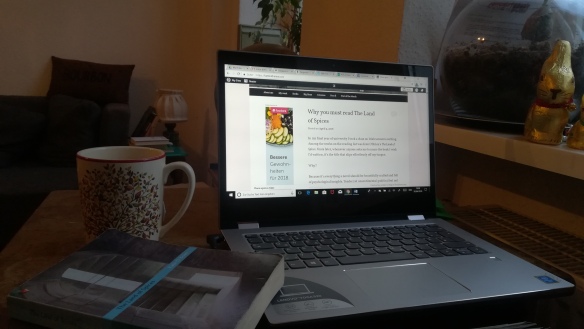 I don’t have the answers; if I did, I’d have written my own Land of Spices. But I do have some relatable quotations to share, which I hope will spark your desire to read this thoroughly perfect book:

When you feel guilty for judging someone harshly, then overthink the situation and appear disingenuous and defensive when you apologize:

She was ashamed of her earlier severity with him … She racked her brain for a way of expressing friendliness and repentance …. But he thought he saw a further thrust at himself in this self-explanation – and he was still rankling with dislike of her.

When blind faith assaults the intellect:

That was the point of the vow, she would tell herself ironically- for can there be obedience without conscious subjection of the brain?

On being alone in grief:

She stared ahead at nothing visible to others.

On the paradoxes of Irish identity:

The Irish liked themselves and throve on their own psychological chaos … They were an ancient martyred race, and of great importance to themselves – that meagre handful of conceptions made a history, made a problem – and made them at once unconquerable and a little silly.”

On fighting the urge to interfere and allowing a person to heal themselves:

For she was confident that a soul, left to itself, has good chances of recovering in some measure from any sickness – whereas rash manipulation may establish a deformity.

In the end, The Land of Spices  was banned because of a single, eleven-word sentence.

It’s a pretty essential one: not the kind you can leave out.

But don’t worry: I won’t share it here. (Spoiler alert)

I guess you’ll just have to pick the book up yourself – and enjoy the exquisite writing of a woman who deserves pride of place in Ireland’s literary canon.

2 thoughts on “Why you must read The Land of Spices”