Sometimes, when I am in the mood to expand my worldview, I follow people on Twitter whose views diverge from my own. It’s an attempt to get outside of my big, fat, liberal media bubble.

I thought you might appreciate that. But I was wrong.

You see, when your profile popped up on my timeline the other day, I thought: here’s someone whose thoughts I don’t hear at dinner parties very often. Your bio read:

“Voted for President Trump! Am NOT PC so if your feelings get hurt easy to (sic) bad. It’s why I block cry-baby liberals.”

The picture that goes with your account is of a middle-aged white woman with blonde hair. You’re smiling, but not in an unconditional, friendliness-for-all, Socialist kind of way. Definitely not like that.

Hmm, I thought. I wonder what kinds of experiences you have had and how they have shaped you into the non-cry-baby, un-PC, Trump-lover you are today. What, I wonder, would your bio have read before the era of Trump? And, also, are you a Russian bot?

Not long afterwards, you wrote me this succinct note, and blocked me before I could reply. 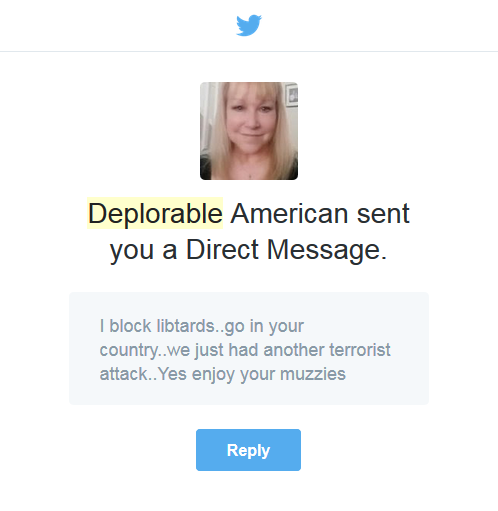 If you had allowed me a few moments of grace, I would have asked you to clarify what you meant by:

“Go in your country” – back you mean? Go back to my country? To Ireland from Germany? Hmm, well, I could I suppose. But the thing is, the European Union has this thing called Freedom of Movement, which makes it legal to live and work in other EU countries. Kind of the way you’re free to move from one American state to another, except in our case, we can cross national borders legally. Crazy, huh?

Or maybe you were under the impression that I live in the United States? I don’t. I’ve visited a few times, but that’s it. So don’t worry. I’m not planning any type of liberal invasion. Phew! You can sleep easy!

“We just had another terrorist attack.” I think you were referring to the terrible attack in New York on Halloween, which left eight people dead. But there were many other terrifying incidents of recent gun violence you could be referring to. Perhaps terrorism is less scary for you when the attacker has the same background and skin color as you do? It would have been nice of you to clarify.

“Yes, enjoy your Muzzies.” – What are “Muzzies?” Is it slang for muzzles? An ironic comment on being muzzled by the politically-correct fake news media? Or are you actually referring to Muslim people? If so, I don’t really know what you mean when you say enjoy. Perhaps I might have found out if you’d let me follow you. Alas though, I’ve been Muzzied from doing so.

Anyway, I’d better get back to my bubble. It was a silly idea to try and break out.

Have a nice day!