My time in Istanbul was drawing to a close and I was feeling sad. I’d been wandering through the streets of the old town trying to find a Syrian family I’d seen begging earlier. I’d walked right past them – then, riddled with guilt – asked LSB to help me find the way back so I could give them some Turkish Lira. When we got there, they’d gone.

We bought some tea and brought it to a bench. From there we had a view of both the Hagia Sophia and the Blue Mosque, which seemed to be competing for magnificence. Above us, a sea gull was being tormented by a man selling laser pointers. The light followed the swooping bird relentlessly, bathing its feathers in a red glow, until the vendor got bored and turned it off.

“I think I have hüzün,” I said, referring to Orhan Pamuk’s description of a particular form of Turkish melancholy, which he ascribes to the decline of the Ottoman Empire.

“Except,” I continued, “I feel sad about the whole world – not just the demise of Turkey’s greatness.”

It is not rational to feel the combined weight of the world’s woes on your shoulders.  As benign as the trigger for your despair might be, this kind of melancholy does not redeem itself by serving as a call to action. Instead, as I sat there, watching men shuffle around trying to sell packets of tissues and stray dogs sleeping under the street lamps, the feeling that coursed through me could best be described as inertia. 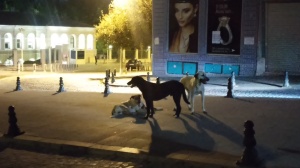 Some of Istanbul’s many stray dogs

LSB and I agree that I probably experience melancholy more often and more acutely than most. The experience encompasses both the general and the particular. While I may begin by grieving the decline of a particular friendship in my life, I am likely to end up lamenting the inevitable death of all relationships. My melancholy is not discerning. Sometimes I cry at a song that sounds sad but whose lyrics I am unable to decipher.

LSB and I share a deep admiration for a friend of mine who I believe distinguishes herself by her ability to – if this is the technical term – “just get on with it.” Her interests are practical – she loves her car, her exercise regime and ticking things off lists. She is not somebody to talk to about ideas or sensations. Her conversations cover familiar ground – they are uncomplicated and comforting – focussing more on mechanical processes, like car washes and the practical details of her work, than on overarching themes – like interrogating the status quo. 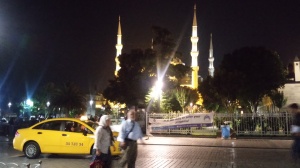 The Blue Mosque at night

I enjoy her company; our conversations remind me that by focussing on life’s more trivial obstacles, we can regain some control. Even if that simply means knowing the best place to fill up a tank.

“Would you like to be like that?” LSB asked me, his eyes now following a drone which was circling the Blue Mosque.

“Sometimes I really would,” I said.

“But would you really?” he asked, knowing he might provoke me into contradicting myself.

“I guess you wouldn’t know what you were missing,” I said.  “I mean, melancholy bears gifts – without encountering it, you’d never recognize its cousin: poignancy and other relatives: beauty, transience and awe.”

“I guess it would,” I said smiling, reluctantly.

4 thoughts on “Imagine a world without melancholy”