“So we have a new pope,” Frau Bienkowski said, as I handed her the bag of medium-sized apples and two packets of sugar-free sweets she’d ordered.

“He could have been a black man,” she continued. “It wouldn’t have mattered.”

“But there was something irregular about Benedict’s resignation, wasn’t there? Popes don’t just resign!”

I agreed it wasn’t their custom. 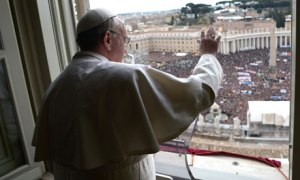 “Could you get us some coffee?” she asked, pushing her stroller over to me. “You can put the cups at the front!”

I placed Frau Bienkowski’s cup in front of her, and she pushed one of her sugar-free sweets towards me.

“So tell me, how has work been this week?”

I told her I’d been busy and that the new pope was creating a lot of work for us.

“You’re not thinking of marriage, no?”

“Well, it would be difficult logistically since we live in different countries,” I said, apologetically.

She nodded. A few weeks ago she’d told me that she thought German president Joachim Gauck really ought to marry his long-term partner, since she travelled with him in an official capacity.

A little later, we got talking about Germany. “We’ll never escape our past,” she said and paused.

“They could have just removed the Jews from official positions. But there were good Jewish doctors, good workers. Sending them to concentration camps, killing them was wrong.”

For the first time, I felt uncomfortable around Frau Bienkowski.

Frau Bienkowski presented me excitedly with a fashion catalogue. “Look what I got in the post!” she said.

We spent some time leafing through the pages and commenting on the clothes.

“I like that,” I’d say, pointing at a blue and white striped cardigan.

We looked at a model in high-heeled shoes. “Do you like them?” I asked.

“Did you wear such high shoes when you were younger?”

“And could you walk in them?”

She smiled. “If you wear them, you walk in them!”

We read some more of the story about the cantankerous 100 year-old living in an Irish convent.

I apologised that I wouldn’t be able to see her next week.

“Don’t you worry!” she said. “This should never be an obligation. And tell Andrew I say hello!”

6 thoughts on ““You’re not thinking of marriage, no?” asked Frau Bienkowski.”