Mauerpark is sparkling in brilliant sunshine. There are hundreds, maybe thousands here.

“Alright!?” an Irish voice shouts to the crowd. He’s standing beside a beatbox-turned-bicycle and a colourful umbrella. There’s a Macbook by his feet. His audience is positioned about him like in an amphitheatre.

A man with tufty grey sideburns, a suit jacket and a slight hunch shuffles to the centre. He lays his cloth bag on the ground and takes the microphone. 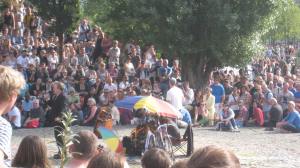 First performance of the afternoon

The tempo increases, he closes his eyes and gets to the chorus. The crowd explodes.

A few more verses and it’s all over. Decker takes several modest, tiny bows before worming his way through the crowd and back out into the park.

Next up is a thin teenage boy wearing a baseball cap. He sings “Every Breath You Take.” Mid-way through he stops and squints at the Macbook on the ground. He’s lost his place. The crowd fills in by clapping and soon he’s back to promising that he’ll be watching us; every breath we take, every step we take.

Katie comes next. She’s a bold and bubbly American comedian. She can’t sing but she’s here to promote her stand-up show. She shakes her body, throws her head back, grabs a passionate hold of an unsuspecting man in the front row and finishes the performance by firing fliers for her next show at the crowd. 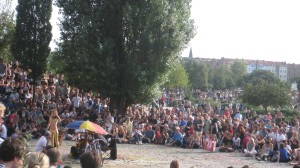 “Woah” says the Irish MC. “Do you always wear those clothes?”

She smiles like Britney and says “at least if my singing doesn’t impress, my clothes will!”

She wins the crowd over with a rendition of “Paparazzi.”

Then comes Ellie, a German girl who sings acapella. She’s followed by man in his fifties who brought his own lyrics, which he he unfolds like a scroll as he gets through the verses.

Finally there’s Seán, from Portland, Oregon. He’s scruffy and handsome with big tattooed arms. The MC is fixing something on the computer and kills time by asking Seán if he’s got a girlfriend or a “special person.” He doesn’t. “And why did you come from squeaky clean Portland to dirty, grubby, tattooy Berlin?”

The crowd roars with approval.

Even better. The Irish MC warns Seán that he is becoming irresistible to the ladies.

Katie the stand-up comedian needs no more prompting. She rushes to the stage, launches herself at Seán and falls down to one knee.

When things have turned sober again, Seán from Portland takes the microphone and performs a stunning version of “House of the Rising Sun.”

This happens every Sunday in Mauerpark in Berlin. The event was set up in 2009 by Irishman Joe Hatchiban, who uses portable, battery-powered boxes to let everyone and anyone unleash their inner star. You can find out more about karaoke in Mauerpark here. It’s yet another reason to love the city.

I’d like to thank a lady called Clare, whom I haven’t had the pleasure of meeting but who sent me a very kind email after my more melancholy post yesterday. She advised me to give this event a go and I’m so glad I did. As you all know, I don’t write for money (though if any philanthropist is reading..) and sometimes I wonder if it’s worth all the work. But when I hear from a kind stranger like Clare, I know it’s worth every minute.

3 thoughts on “Berlin does Karaoke”