At first it was exhilarating.

I wanted the hostel, where I stayed the first few nights, to be my home forever. I loved the anonymity of the place – the backpackers waiting for a leftover packet of pasta to boil, the discarded tea bags, the little laminated signs asking travellers to consider the environment before throwing away their rubbish.

There were two Asian-looking girls in the kitchen one evening. One had an American accent, the other was British. They had met at the hostel and now they were friends. The American wanted to go to “school” in Europe. The other nodded and made dinner.

In the evenings I bought a falafel sandwich or a slice of pizza on the main street which was soon to become my neighbourhood.

One morning — my first in Berlin, I took a bus tour of the city. On the top deck, a round lady with red-painted lips and peroxide hair gripped a microphone and gave a commentary of the city in English that was so broken that a tourist behind me muttered that he had more chance of understanding German. Her smile was fixed to her face like a stubborn mole, her face was wrinkled. If she had had no folds on her face, she would have looked like a doll. I knew she had grown up in east Germany. She learnt Russian at school. No west German tour guide would speak so little English.

I scribbled down the names of places that looked interesting from the bus. I saw pink water pipes all over the city, the president’s house, the parks, and a beautiful square.

I found my workplace and my heart jumped when I saw that it was five minutes away from the Brandenburg Gate. I found a little photo booth and got a picture taken for my student travel card. I followed the instructions for getting a passport photograph taken. “Don’t smile” said the machine. “You must not tilt your head, or obscure your face with your hair.”

I look so stony in the picture that weeks later, when the secretary at Spiegel looked at the card she said “but you are so cross!”

After I checked into my hostel on that first night, I went out to try to find the apartment I would be moving in to.
It wasn’t far from the hostel. It was late February and it was dark. I approached the flat from a direction I never walk now. I found the shoe shop and the children’s book store that Google Maps had promised me. The street was quiet and I was alone. 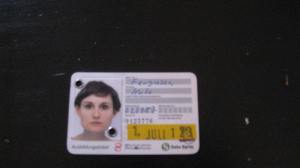 I found the number and glanced up at the building. It was too dark to see anything.

I walked past a church, back to the main street. Next to my hostel was a photocopying shop and a video store. All rentals one euro. There was a large adult movie section on display in the window.

The day before I moved into my new flat, I met a book vendor outside Humboldt University. He had wild white hair and a black hat. He said: “You don’t think I have mornings when I wake up and say ‘Fuck this shit. I don’t want to stand at this fucking table selling books all day? And then you know what? I see children laughing and playing and nothing matters any more.”

I nodded at him, I think I smiled. I thought we were the only two people in the city. The sky turned midnight blue and the TV tower was lit up in the distance. I bought a book called “Der Steppenwolf”. The cover is blue and there are bits of paper still stuffed inside a page in the middle of the book, where I stopped reading it.

As the lights came on and I got into a grubby underground train, something danced in my brain. Now I realise it was the taste of freedom.