The word Erfolgserlebnis means experience of success but the usage in German is much more subtle than that.

If you win the lottery or get a great job, you don’t have an Erfolgserlebnis; you’re simply “erfolgreich”, or “successful.” But if you finish a particularly tricky Sudoku or make a delicious apple pie, you have an “erfolgserlebnis.”

My first erfolgserlebnis in Berlin was finding my hostel successfully. I am notorious for having no sense of direction. That’s still the case but because I was so anxious before I came here, I took extensive notes of the landmarks which I could expect to see when I got out of the Strassenbahn. When I then managed to find the hostel without difficulty by identifying the gigantic Fernseher Turm: the tower which was covered in mist that time I almost died while climbing the Victory Column I positively glowed with success.

My second erfolgserlebnis was finding out that there’s a marzipan flavour of Milka chocolate and that you can buy it for just 57 cent at Kaufland. I plan to stock up this weekend.

My third erfolgserlebnis was last Friday, when I had my first article published on Spiegel Online. I was convinced I would be the first intern not to have anything published so when the story came up and my ridiculous name appeared in the byline I was more than chuffed. I was smiling so stupidly on the U-Bahn on the way home that I had to hide my face in my scarf to avoid offending the other passengers.

On the way home that night I bought myself some raspberry flavour beer. Since making friends is still on my “to do” list, that evening it was just me and the cat. 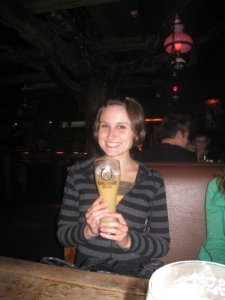 After heating up some of my leftovers, I decided it was high time I settled down with some of the local brew.

Then, in one of my life’s more unfortunate epiphanies, I discovered I usually drink beer in company and often with with LSB, who is kind enough to open the bottle.

Now that I have become emancipated, I had to search helplessly for a way in to the promising brew.

I have seen cool people open beer bottles with their teeth, or by levering the edge of the lid against a counter-top.

I tried both these things. Then, remembering about the evolution of tools, I searched for a bottle opener.

I scoured the kitchen and then grabbed a little implement triumphantly from the drawer.

After several minutes, I realised that I was trying to open my bottle of beer with a garlic crusher.

This, dear readers, was not an example of an Erfolgserlebnis.

8 thoughts on “On The “Erfolgserlebnis””