I found myself eating a sourdough sandwich alone on a bench in the Jervis Shopping Centre last week. From where I was sitting (right outside Forever 21) I had a perfect view of The Nail Bar, where two ladies were being treated to a French manicure and the attachment of gel nails.

The two clients, perched on stools with their hands stretched out in an arc before them bore an uncanny resemblance to a pair of begging lapdogs. The more I gazed at them the greater my desire to laugh and when I could bare it no longer, I let out a little giggle, which caused the man next to me, who was minding his teenage daughter’s shopping bags, to turn and stare.

I’m pretty confident that I’m the least nail-savvy woman in Ireland. I’m not sure if I even own nail polish, after my recent mass exodus of make-up of age ten years or more from my room. I’ve never had my nails done and the two or three attempts to paint my own in my early teenage years resulted in odd splashes of green glitter, which still pepper my carpet. 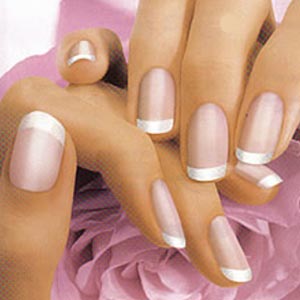 In case it seems as if I’m condemning the common cuticle, I promise you I am not. Sure we couldn’t do without them. They’re an anatomic necessity. Wikipedia puts it just beautifully:

“A nail is a horn-like envelope covering the dorsal aspect of the terminal phalanges of fingers and toes in humans, most non-human primates, and a few other mammals”.

Personally, I find them useful to pick at when nervous or for opening tricky plastic packaging.

I just don’t care how they look.

Don’t get me wrong. Perfectly-shaped contours are always nice. Anything well painted is a pleasure to look at.

The problem is, I don’t look at nails. I do not take sneaky downward glances to check out other women’s fingertips and I very rarely seek to improve the condition of my own.

Truth be told, their appearance is a matter of complete indifference to me.

It’s not for lack of vanity. I love clothes and good eye make-up and a gentle foundation. I flick through photographs of celebrities before I choose a haircut and I always turn to stare at interesting-looking people or those with beautiful clothes. I guess the reason that I’m indifferent to nails is that I think their cultivation is of little or no consequence to the overall appearance of a person.

I know, I know: I can already hear the cries of despair. It’s all about the detail. A real lady pays attention to her body from head to toenail. Each nail is a tapestry waiting to be coloured with exquisite strokes of blood red, deep blue and neon pink. A lady with fine nails is a lady with a well-kept mind.

Maybe so, but I just can’t see the point of it. Nails are tiny, breakable and their pinkish hue makes them naturally delicate and petal-like. Making them longer, or sharpening them or attaching sticky stuff to them seems to represent an awful lot of effort with little promise of reward.

I guess you have to be a connoisseur.

On my way out of the Jervis Centre I watched a pretty Spanish girl being stopped by a salesman in a black t-shirt. He asked her whether he could see her nails. She laughed a little and put out her hand. He took it in his and pretended to examine it carefully. Her nails were short enough, with a glimmer of pink sheen. He wasn’t pleased. He whipped out a special little square gadget and began rubbing her nails with it. Judging by his facial reaction, and her reluctant smile, they had been transformed. He swept her away to his stand, where she bought his tool. He popped in into the bag for her and she was on her way.

Talk about nailing your market.

Am I the only one that doesn’t get the hype? Are you a perfect-nails kind of gal? Are you a man with a penchant for well-painted lady-nails? Does the idea of breaking a nail fill you with fear? Is this another example of my inability to see the trees for the wood? Answers on a postcard, please.