Oh, the joys of going to the dump! Or, The Bring Centre, as some would have it. LSB and I made a morning of it on Saturday. It was hard not to feel smug as we traipsed into the yard bearing cloth bags of carefully separated rubbish (it was only later that we realised we had over-segregated). The place was buzzing. A little girl was perched on her father’s hip, hurling – delightedly – one empty bottle of olive oil after another into the expansive container. Whole families disembarked cars with boots full of garden waste. Leaves danced briefly in the breeze before a teasing plastic flap hid them from view. The quaint sign on the side of a building summed it all up nicely: A place for everything and everything in its place.

If my weekend had a caption, that would be it.

I would rate myself as reasonably hygienic and even obsessively compulsive in a few, select areas of personal repulsion (handling coins, public keyboards and door handles results in extreme self-flagellation with a scrubbing-brush). I have however never been tidy nor am I endowed with much pride in the domestic sphere. Following my visit to the dump however, I underwent a transformation.

This weekend, I took up recreational ironing, which I practised while listening to my Teach Yourself Arabic CD, in the hope that I will forever associate the joy of learning with the delight of housekeeping. I washed up while listening to The Smiths greatest hits, which gave me the idea to omit all the propositions from the text of Panic, and invite my Intermediate students to fill them in while listening to the track. Who said that grammar can’t be fun? I got a good 45 minutes out of Mr Morrissey and (former) friends this morning.

I also gave my teddy bear (Brom) and mouse (Mini) their first bath in decades. They had been waiting patiently for their turn under my desk ever since they came back from the Christmas markets in Nurnberg, where I remarked on their shabby condition. As I type they are crouched on my clothes horse, drying and sleepy. 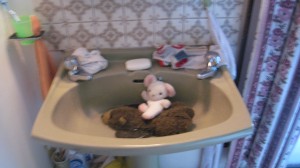 Brom and Mini enjoy their first bath in decades

Last night I cooked a spinach lasagna, which is pleasing but somewhat lacking in ‘umph’, particularly when compared to last week’s pasties, which I would describe as a personal culinary best.I’m expecting LSB any minute now so it’s time to get peeling potatoes. Tonight: chunky, home-made wedges served with a side of leek, and well, re-heated spinach lasagna…

4 thoughts on “Some notes on housekeeping”