A small and silent rebellion is taking place on our shores. Though they remain anonymous, the twenty-two dissenters are known to carry hammers. A number among them are purported to disguise themselves with a mass of white curls, which they pin to their heads. They are protected by Article 35 of the Constitution and the extent of that defence will be put to the Irish people in a referendum next September. Should it be passed, the band of twenty-two judges who have elected not to make a voluntary contribution to the revenue in lieu of the levies imposed upon all other public sector workers will be forced to take a cut in pay as their 126 colleagues have already seen fit to do.

The judiciary must remain independent, so for that reason Article 35.5 of Bunreacht na hEireann states simply that The remuneration of a judge shall not be reduced during his continuance in office. From a political, psychological and economic perspective such reasoning is utterly non sequential.

Given that the aim of such a clause appears to be to prevent judges from state influence, that purpose is itself contradicted by a notable omission. Judges’ pay may not be reduced but it may be increased at the whim of a minister looking for a favour, for example. The possibility of a salary rise is the principle behind performance-related pay, which employers use as an incentive in order to encourage workers to perform in line with their expectations and desires.

The difference between loss aversion; working to avoid a drop in salary and performance-related pay is trivial from a psychological perspective. As a motivating factor, the distinction lies in personality type: some people are more encouraged by risk avoidance and others by self-advancement. There is no reason why judges should be disproportionately oriented toward the former. 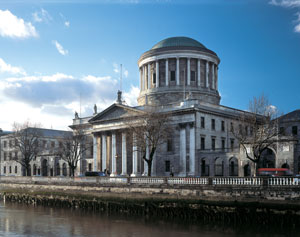 There is another principle that has been overlooked in the omission in Article 35.5 however, which is psychologically universal. You see, if somebody does you a good turn, you like to return the favour. If the Minister decides to increase pay, there’s a niggling, self-imposed obligation to display gratitude by performing in accordance with his desires. Social theorists have called it Reciprocal Determinism and in everyday parlance we say: I scratch your back; you scratch mine.

Of course, all of this speculation treats the individual as a machine: you put this in and you get that out. The prospect that judges will carry out their duties in relation to their salary is akin to considering that teachers will write report cards for students in accordance to their pay slip and that a nurse’s bedside manner fluctuates in tandem with his or her remuneration. It’s well known that poor conditions lead to sloppy work but in the case of judges, sloppy work results in poor decision making generally rather than in partiality.

Furthermore, where an entire class of workers is in question, an individual is less likely to respond with venom than in a case where their pay alone has been cut.

Where the issue of judicial partiality arises glaringly obviously is in the appointment procedure. Since candidates need to be selected by the Oireachtas and favoured by the president, the hope of a justice system independent of political influence is thwarted before it has any hope of being established.

This Septermber, when the people cast their votes to elect their president they are by extension influencing the selection of their future judges. It is this cosy relationship between politics and judicial administration which Article 35.5 sustains rather than prevents.

The measures taken by the new government to curb these relationships have so far been encouraging. Leo Varadkar’s threat not to reappoint all seven of the board members of the DAA should the bonus allotted to Chief Executive Brendan Collier not be reversed is a sign that a new era of political responsibility might be upon us. Brendan Howlin’s plan to cap salaries of future Chief Executives of Commercial state companies is also a signal that politics is moving away from its traditional links with largescale enterprise.

As they beat their hammers on their oak writing tables and whisper “Objection” in advance of September’s Referendum, the twenty-two dissenters will inevitably privately concede that the scrapping of Article 35.5 represents good riddance to bad rubbish. Objection over-ruled.

3 thoughts on “Irish judges above the law? Objection!”