Oh – wistful sigh – the stories I could tell you about the sex, drug and electro-music – obssessed Italian teenagers. For sure the tale of Akram’s business card, which I employ now as a bookmark could also have been enshrined into a blog post. The sad truth is that I have been too busy to continue my confessions and that my daily routine of walking for two-and-a-half hours and teaching for eight is taking its toll in physical and mental fatigue.
Constant contact with foreigners nevertheless continues to please. I am dealing very well with the unceasing extroversion required of my profession and I am convinced that my love of improvisation is at the root of it. I have grown passionately fond of Akram and his friends and have forgiven but not forgotten his trangression. I have heard King Abdullah of Saudi Arabia described as “vedy beautiful person” and have been suitably bemused at his feature in Akram’s “Greatest Person in the World” project presentation. In short, I have been freshly motivated in my desire to learn Arabic, first announced back when I was marvelling at brain plasticity. 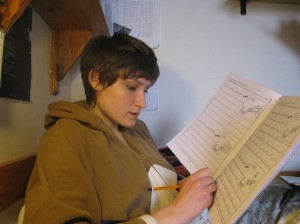 I just love how everything in the language is stylishly incomprehensible and back-to-front. I have self-diagnosed dyspraxia (the most severe kind) and if there is a ‘wrong’ way to do something simple, I have found it. For example, one summer while eating dinner high up in the Swiss Alps, an American across from me regarded the manner in which I was holding my fork and asked me whether this peculiar grip was “Irish tradition”. I told her it was but have had a silent complex ever since. Perhaps for this reason, the idea of reading unintelligble symbols backwards has long held an intuitive appeal.

So I have bought myself a backwards Arabic workbook so that I can learn the alphabet. It’s mega-cool. It only cost me €5.65 in Hodges Figgis and it requires of me to trace letters repeatedly just like I did in those special copybooks when I was four. Last night, while babysitting in a quiet house with nothing but the heavy breath of a sleeping labrador beside me, I began to form the letters: Alif, Baa, Taa, Thaa …

It’s sure to be a journey of 1001 Arabic nights and more, but it’s only one item on my ever-growing mental to-do-list, which includes – if only putatively – emigration and re-sewing the golden buttons onto my coat from AWear. More of both in the future, but meanwhile, why not follow me on my journey and learn some Arabic with me along the way? السلام