All of them terrible of course, when I’m in a certain mood. Their only function to form fraudulent sentences. Most of it a garbled version of my life. All of it an unimaginative reassembly of reality.

I’m writing a novel. There I’ve said it. If I never say it, there’s even less chance I’ll do it.

It’s set in a nursing home and heavily inspired by Frau B. But the story is not hers. It’s made up.

The fictional aspect is especially important. Frau B’s already gifting me with inspiration.  It would taint our meetings to ask for biographical details.. for permission to print old photographs.. for a linear summary of her life. We dip in and out of each other’s lives every week. It would seem wrong to go excavating instead.

I began it as part of NaNoWriMo, a worldwide online challenge to write a 50,000 word novel in the month of November.

An impossible task for me, I knew. Not that I would have otherwise, but I was working full-time and had plenty of other activities going on. Still, it was a little kick and I was receptive to it. Plus, they sent you motivational e-mails and had a function allowing you to update your word-count, which I did obsessively, almost sentence by sentence.

It’s hard to articulate the kind of self-doubt that comes with writing. For me, it never gets easier. I’m painfully slow. I am not full of ideas. It rarely flows.

I compare myself with the writers I admire and despair. I Google videos and interviews with them for evidence of their self-doubt. Usually you can find some.

I feel uniquely empty, incapable of adding anything of interest to the world, amazed at others’ ability to make conversation, to come up with witty responses, to communicate unfettered. I imagine how much I could put to paper with those talents.

My news feeds full of the atrocities in Aleppo, I feel all the more ashamed of even having such thoughts.

Still, I haven’t deleted the document. It’s still on my computer.

And it wouldn’t be if I didn’t believe, somewhere small and very deep down, that it was possible.

So I’m out of the closet. I’m trying to write a novel.

I read a piece of advice earlier that the first step to becoming a writer is to call yourself one.

I’ll occasionally write about writing here. Perhaps it will even be a welcome distraction from the task in hand. 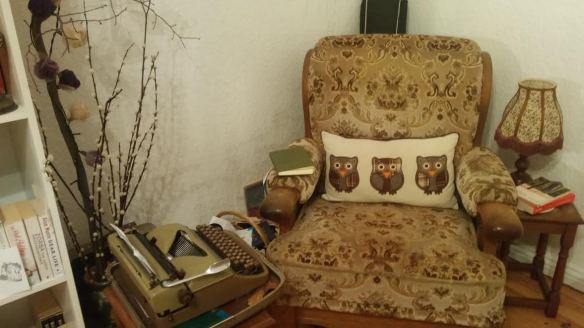