A year ago I declared myself an insufferably smug gardener. After a punishing winter which saw most of my plants die, I’m now ready to gloat once again about what’s sprouting on my tiny, north-facing balcony. This spring, my prime focus has been on planting supermarket vegetables that have passed their peak. A few weeks ago, I plopped a wrinkly potato that had already begun to sprout into a pot of earth. It took a while for it to do anything but now it looks like this:

All I did was plant a wrinkly, sprouting potato!

I did the same with an onion: 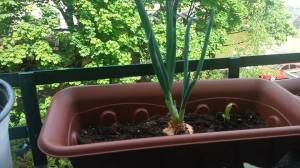 And in an ongoing experiment I’m very excited about, I cut a stem off a basil plant and placed it in a glass of water on my kitchen window sill. For weeks, it did nothing. Then one day, I walked into the kitchen and let out a little shriek. Just like the Internet had promised, it had begun to grow roots. In a few days, I’ll transfer it into a pot of earth and hopefully end up with a whole new basil plant. Isn’t nature wonderful?

You can also grow more scallions by placing the roots in water!! 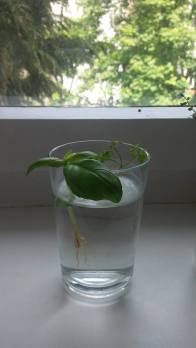 My gardening ambitions far exceed the confines of my tiny balcony. As a result, I’ve resorted to piling beer crates on top of each other to increase real estate. I feel a bit like a greedy property developer building high-rises on a tiny patch of land. Partial as he is to a Weissbier though, LSB has been most helpful in providing me with construction material.

So despite an acute lack space, I have been unable to resist planting the pumpkin seeds I impulse-bought. Nor have I managed to refrain from purchasing gooseberry, raspberry and red currant plants. Sure, I might be turning into a mad gardening lady. But the great thing about this habit is that when you feed it, it feeds you back. Can’t say the same thing about other cool habits.  Like drinking, smoking, gambling or crocheting. 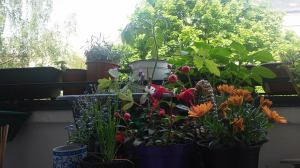 8 thoughts on “The not-so-secret gardener”