“How may I help you?” asked the chiselled librarian with grey hair and round eyes.
“Do you have any books in large print that you’d recommend for a 93 year-old?”

He typed into his computer and frowned.

“We have very few books in large print left,” he said. “The demand simply isn’t there. Old people are opting for audio books.”
“I suspected as much.”
“Wait though. Come with me. We do have selected titles.”

We snaked up and down the aisles at the back of the library. “Ah this one could work … and this! he cried, snatching a book every few shelves.

He left me with a pile, from which I selected Die Pforte zum Himelreich by Irish writer Una Troy, featuring nuns in small-town Ireland and an unconventional 100 year-old lady who stirs things up. I also took Ulla Lauchauer’s Ostpreußische Lebensläufe, roughly translated as “Biographies from East Prussia.”

“Yes, the story about the nun sounds interesting,” Frau Bienkowski, who was wearing green, said later.

Then I took out the book about biographies from East Prussia. “Can you bring me that photograph?” Frau Bienkowski asked, motioning to a frame hanging over her bedside table.

Frau Bienkowski balanced the black and white photograph on her knee. She turned on the lamp on her magnifying glass.

“This is my grandparents’ Golden Wedding Anniversary in East Prussia,” she said. “If you look carefully you can see the number 50 carved into the flower arrangement at the back.” 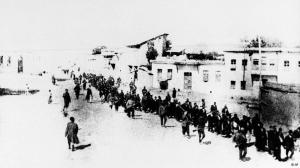 “We were a big family. That’s me at the bottom on the left,” she said pointing to a little girl with cropped hair and buckled shoes kneeling on the ground. “Those are my grandparents in the middle and those are my aunts and their husbands. These are my cousins.”

“She was killed,” she said pointing to an aunt. “So was she, my cousin too. He fled, and so did she.

“And this man” she said pointing to the back row of the photograph. “He was married to my aunt Anne.”

“She was very ill, and told him to flee alone. He did, and she died soon after. Years later we heard from him. He got away, and married again. But he said ‘She’ll never be my Annie.'”

Later we talk about how her perm needs to be touched up, about how she would like some new clothes from the spring catalogue and how she left everything she owned at home when she moved into the nursing home.

“I don’t want to know what happened to it all,” she said.