This morning, news reached Berlin that a Daniel O’Donnell museum had opened in Donegal, northern Ireland.

In an interview with the state broadcaster , Daniel said that the collection included “suits I would have worn through the years”, his “Donegal Person of the Year” trophy from 1989 and the school-bag he used 40 years ago.

At lunch I went to the bakery in the underground station beside my office and bought a latté from the woman that doesn’t know she’s in my life.

I sat down on a little red plastic seat and surrounded by the buzz of Berlin commuters, I began to think about Daniel O’Donnell.

I even took some notes.

If Daniel O’Donnell were to appear in fiction I decided, I would accuse his character of lacking credibility.

And that, perhaps is exactly what lies at the heart of his success.

Daniel is softly-spoken and meanders effortlessly about attempts to get a rise out of him. His eyes have the characteristic hazy, other-wordliness of an evangelical, but none of the accompanying conviction.

Last year, when Ireland’s flagship late-night chat show dedicated an entire program to celebrating his 50th birthday, I thought that in spite of the comedic value of such an event, something extraordinary was happening in my country.

The Late Late Show had become Father Ted and nobody seemed to be batting an eye.

My father has a great phrase he uses to describe someone he knew long ago: “He was known for his humour;” dad says, pausing before he adds, “some of it conscious.”

The official Daniel O’Donnell fan page features what is described as “the perfect gift”: a digitally signed and personalized photograph of Daniel. Fans can choose a message and clever technology will re-master it to look like Daniel’s handwriting. The sample photograph reads: For Bev, the best mum in the world.x 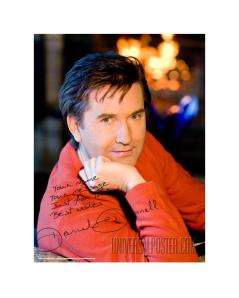 Daniel’s website, which is run by his wife Majella, features a fact file similar to the ones you’d find in the “unofficial biographies” of 90’s pop groups like Steps or Five, which are directed at the pre-teen market. It looks like this:

I have written before about the blend of wily opportunism and endearing naivety that characterises many an Irish success story.

I believe that beyond the softness of the Donegal lilt and the string of attractive clichés that bounces so effortlessly from his tongue, lurks a very shrewd man, trying to conceal his bemusement at the fact that the pile of stuff that he would otherwise have dumped into bags destined for Oxfam, will instead be displayed behind glass cases in a lucrative personal shrine. Or “visitors’ centre,” as he would have us call it.

You’ve got to hand it to Daniel: he has a fine appreciation of the ridiculous.

And as thousands rush to caress the fine silk tie that Daniel wore on tour once or queue up to marvel at the honorary MBE he was awarded in 2001, it’s fair to say that the joke’s on us.

As if I didn’t have enough reasons to come home.

9 thoughts on “Daniel O’Donnell: Charms To Which I am Immune?”